In the software world, “waterfall” is commonly used to describe a style of
software process, one that contrasts with the ideas of iterative,
or agile styles. Like many well-known terms in software it’s meaning is
ill-defined and origins are obscure – but I find its essential theme is
breaking down a large effort into phases based on activity.

It’s not clear how the word “waterfall” became so prevalent, but most
people base its origin on a paper by Winston
Royce, in particular this figure: 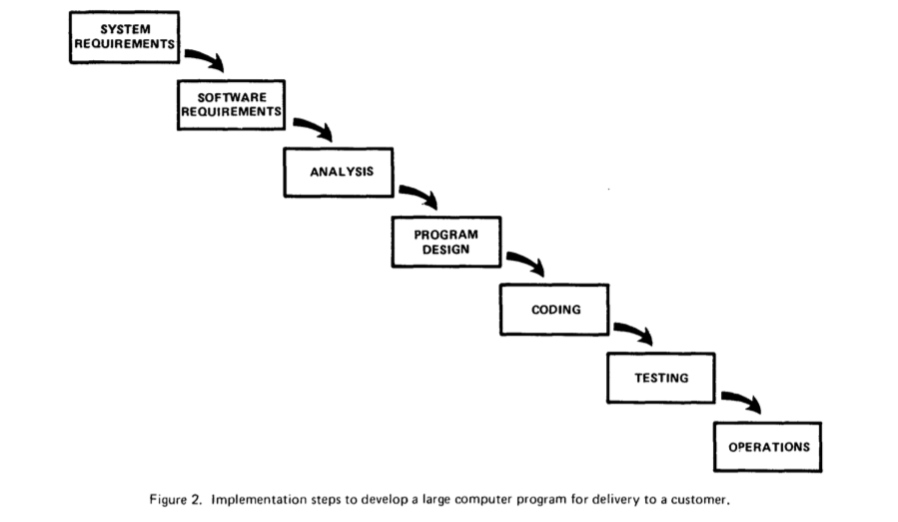 Although this paper seems to be universally acknowledged as the source of
the notion of waterfall (based on the shape of the downward cascade of tasks),
the term “waterfall” never appears in the paper. It’s not clear how the name
appeared later.

Royce’s paper describes his observations on the software development
process of the time (late 60s) and how the usual implementation steps could be
improved. [1] But “waterfall” has gone much
further, to be used as a general description of a style of software
development. For people like me, who speak at software conferences, it almost
always only appears in a derogatory manner – I can’t recall hearing any
conference speaker saying anything good about waterfall for many years.
However when talking to practitioners in enterprises I do hear of it spoken as
a viable, even preferred, development style. Certainly less so now than in the
90s, but more frequently than one might assume by listening to process
mavens.

But what exactly is “waterfall”? That’s not an easy question to answer as,
like so many things in software, there is no clear definition. In my
judgment, there is one common characteristic that dominates any definition
folks use for waterfall, and that’s the idea of decomposing effort into phases
based on activity.

Let me unpack that phrase. Let’s say I have some software to build, and I
think it’s going to take about a year to build it. Few people are going to
happily say “go away for a year and tell me when its done”. Instead, most
people will want to break down that year into smaller chunks, so they can
monitor progress and have confidence that things are on track. The question
then is how do we perform this break down?

The waterfall style, as suggested by the Royce sketch, does it by the
activity we are doing. So our 1 year project might be broken down into 2
months of analysis, followed by 4 months design, 3 months of coding, and 3
months of testing. The contrast here is to an iterative style, where we would
take some high level requirements (build a library management system), and
divide them into subsets (search catalog, reserve a book, check-out and
return, assess fines). We’d then take one of these subsets and spend a couple
of months to build working software to implement that functionality,
delivering either into a staging environment or preferably into a live
production setting. Having done that with one subset, we’d continue with
further subsets. 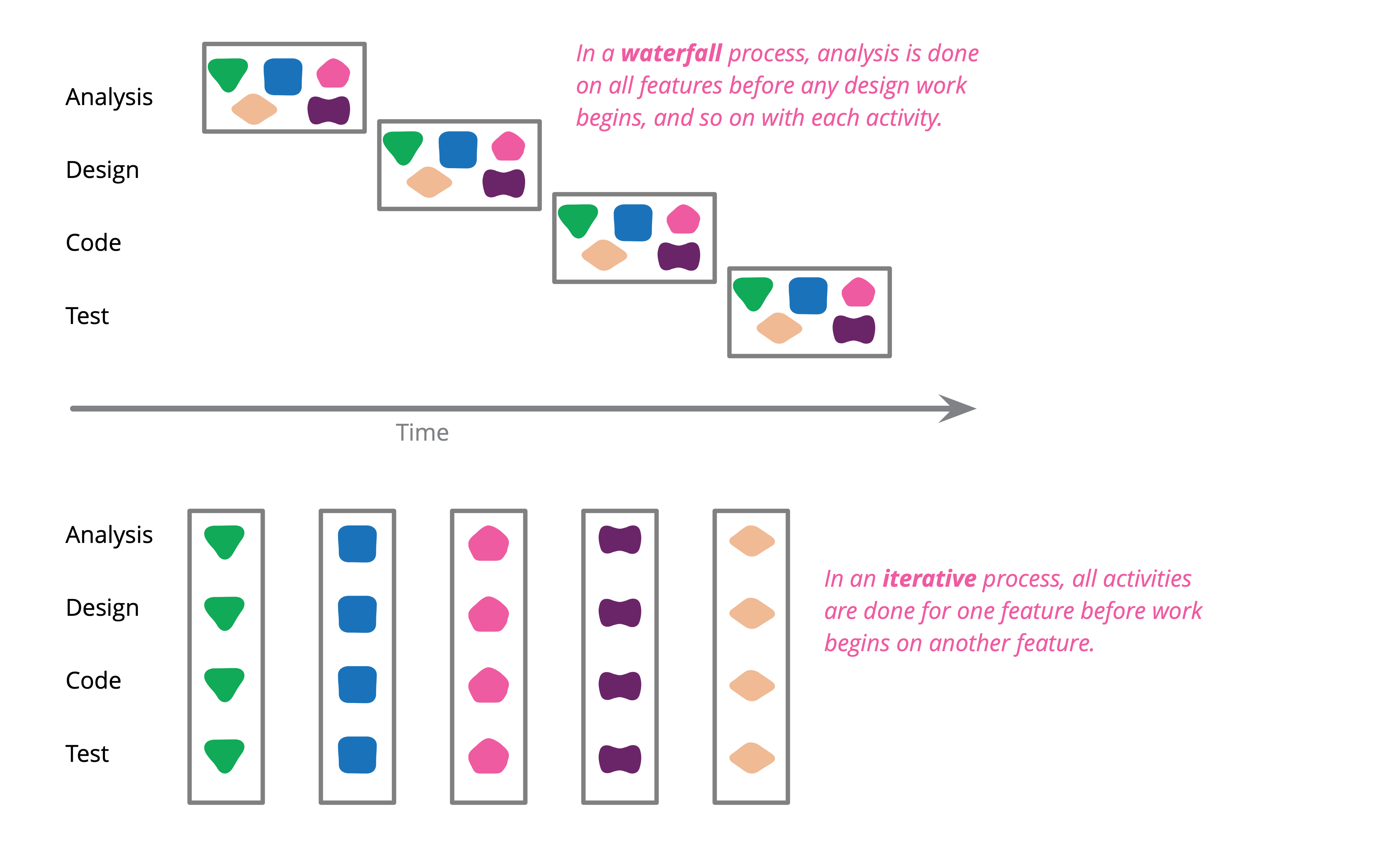 In this thinking waterfall means “do one activity at a time for all the
features” while iterative means “do all activities for one feature at a time”.

If the origin of the word “waterfall” is murky, so is the notion of how
this phase-based breakdown originated. My guess is that it’s natural to break
down a large task into different activities, especially if you look to
activities such as building construction as an inspiration. Each activity
requires different skills, so getting all the analysts to complete analysis
before you bring in all the coders makes intuitive sense. It seems
logical that a misunderstanding of requirements is cheaper to fix before
people begin coding – especially considering the state of computers in the
late 60s. Finally the same activity-based breakdown can be used as a standard
for many projects, while a feature-based breakdown is harder to teach. [2]

Although it isn’t hard to find people explain why this waterfall thinking
isn’t a good idea for software development, I should summarize my primary
objections to the waterfall style
here.

The waterfall style usually has testing and integration as two of the final
phases in the cycle, but these are the most difficult to predict elements in a
development project. Problems at these stages lead to rework of many steps of
earlier phases, and to significant project delays. It’s too easy to declare
all but the late phases as “done”, with much work missing, and thus it’s hard
to tell if the project is going well.
There is no opportunity for early releases before all features are done. All this
introduces a great deal of risk to the development effort.

Furthermore, a waterfall approach forces us into a predictive style of
planning, it assumes that once you are done with a phase, such as requirements
analysis, the resulting deliverable is a
stable platform for later phases to base their work on. [3] In practice the vast
majority of software projects find they need to change their requirements
significantly within a few months, due to everyone learning more about the
domain, the characteristics of the software environment, and changes in the
business environment. Indeed we’ve found that
delivering a subset of features does more than anything to help clarify what
needs to be done next, so an iterative approach allows us to shift to an
adaptive planning approach where we update our plans as we learn what the
real software needs are. [4]

These are the major reasons
why I’ve glibly said that “you should use iterative development only in projects that
you want to succeed”.

Waterfalls and iterations may nest inside each other. A six year project
might consist of two 3 year projects, where each of the two projects are
structured in a waterfall style, but the second project adds additional
features. You can think of this as a two-iteration project at the top level
with each iteration as a waterfall. Due to the large size and small number of
iterations, I’d regard that as primarily a waterfall project. In contrast you
might see a project with 16 iterations of one month each, where each
iteration is planned in a waterfall style. That I’d see as primarily
iterative. While in theory there’s potential for a middle ground projects that
are hard to classify, in practice it’s usually easy to tell that one style
predominates.

It is possible for a mix of waterfall and iterative where early phases
(requirements analysis, high level design) are done in a waterfall style while
later phases (detailed design, code, test) are done in an iterative manner.
This reduces the risks inherent in late testing and integration phases, but
does not enable adaptive planning.

Waterfall is often cast as the alternative to agile software development,
but I don’t see that as strictly true. Certainly agile processes require an
iterative approach and cannot work in a waterfall style. But it is easy to
follow an iterative approach (i.e. non-waterfall) but not be agile. [5] I might do
this by taking 100 features and dividing them up into ten iterations over the
next year, and then expecting that each iteration should complete on time with
its planned set of features. If I do this, my initial plan is a predictive
plan, if all goes well I should expect the work to closely follow the plan. But
adaptive planning is an essential element of
agile thinking. I expect features to move between iterations, new features to
appear, and many features to be discarded as no longer valuable enough.g 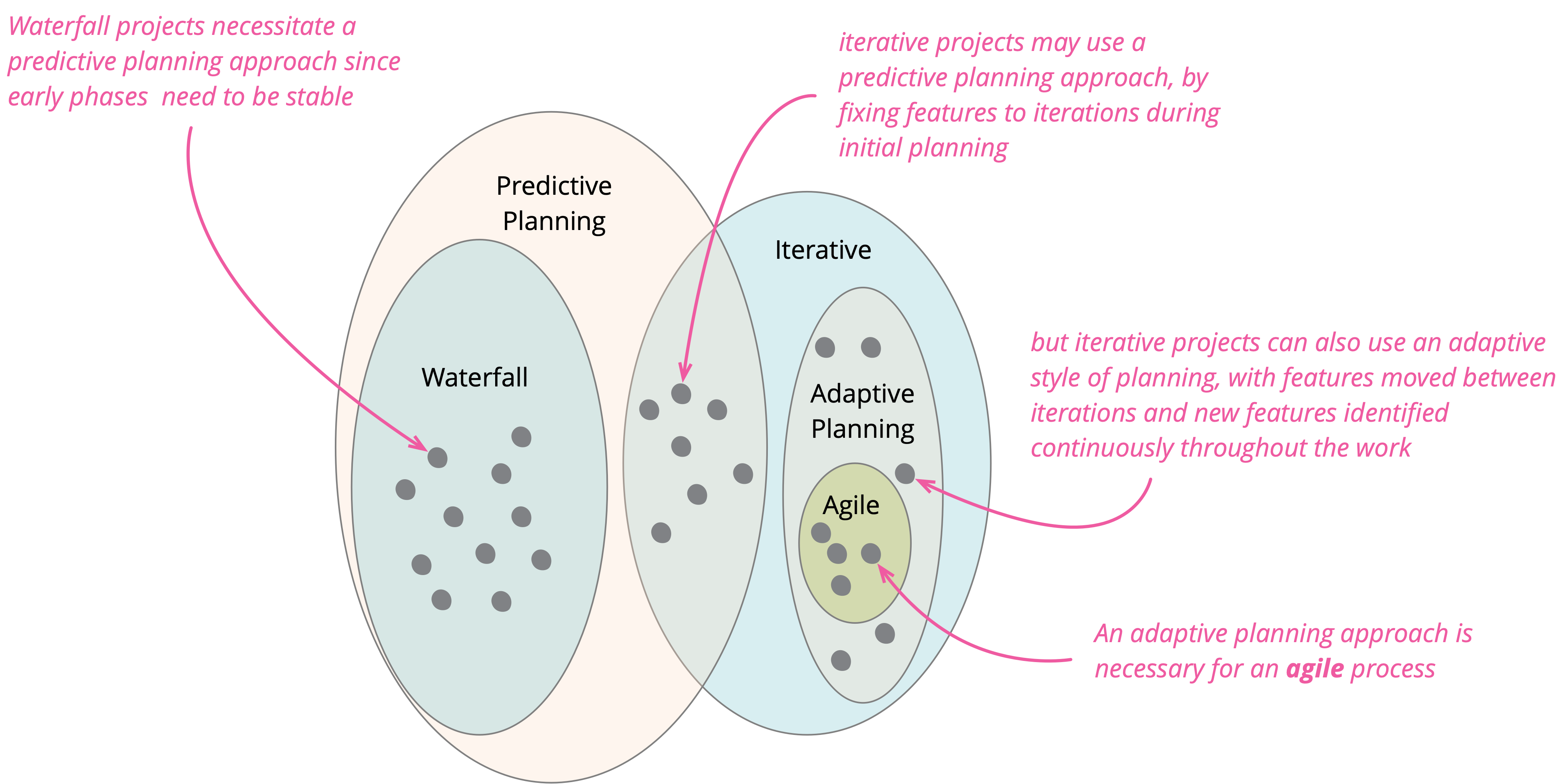 My rule of thumb is that anyone who
says “we were successful because we were on-time and on-budget” is
thinking in terms of predictive planning, even if they are following an
iterative process, and thus is not thinking with an agile mindset.
In the agile world, success is all about business value – regardless of what
was written in a plan months ago. Plans are made, but updated regularly. They guide
decisions on what to do next, but are not used as a success measure.

1:
There have been quite a few people seeking to interpret the Royce paper.
Some argue that his paper opposes waterfall, pointing out that the
paper discusses flaws in the kind of process suggested by the figure 2
that I’ve quoted here. Certainly he does discuss flaws, but he also says
the illustrated approach is “fundamentally sound”. Certainly this
activity-based decomposition of projects became the accepted model in the
decades that followed.

2:
This leads to another common characteristic that goes with the term
“waterfall” – rigid processes that tell everyone in detail what they
should do. Certainly the software process folks in the 90s were keen on
coming up with prescriptive methods, but such prescriptive thinking also
affected many who advocated iterative techniques. Indeed although agile
methods explicitly disavow this kind of Taylorist
thinking, I often hear of faux-agile
initiatives following this route.

3:
The notion that a phase should be finished before the next one is started
is a convenient fiction. Even the most eager waterfall
proponent would agree that some rework on prior stages is necessary in
practice, although I think most would say that if executed perfectly, each
activity wouldn’t need rework. Royce’s paper explicitly discussed how
iteration was expected between adjacent steps (eg Analysis and Program
Design in his figure). However Royce argued that longer backtracks (eg
between Program Design and Testing) were a serious problem.

4:
This does raise the question of whether there are contexts where
the waterfall style is actually better than the iterative one. In theory,
waterfall might well work better in situations where there was a deep
understanding of the requirements, and the technologies being used – and
neither of those things would significantly change during the life of the
product. I say “in theory” because I’ve not come across such a
circumstance, so I can’t judge if waterfall would be appropriate in
practice. And even then I’d be reluctant to follow the waterfall style for
the later phases (code-test-integrate) as I’ve found so much value in
interleaving testing with coding while doing continuous integration..

5:
In the 90s it was generally accepted in the object-oriented world that
waterfall was a bad idea and should be replaced with an iterative style.
However I don’t think there was the degree of embracing changing
requirements that appeared with the agile community.