1. Last summer, when I was hitchhiking across northern Cyprus, a British couple wanted to give me a ride from our hotel. The problem: Their car wouldn’t start. Luckily, I was carrying a Leatherman Skeletool CX, which has pliers, which I used to tighten the battery leads and get the car going. Now I don’t go anywhere without a multitool. I’ve used it to slice goat cheese in Monaco and reattach a suitcase wheel in Vilnius. This week, however, I’m planning to lay aside my Skeletool for the Leatherman Juice C2, which not only costs less ($31.99 at Amazon) but has more tools, including a corkscrew.

2. Caving in the Black Hills of South Dakota. Camping in Oregon. Reading a book on an overnight train from Istanbul to Bucharest. Couldn’t have done any of that without a flashlight. Now, forget about old-school incandescent bulbs — LEDs are the way to go, and from the reviews I’ve read, Cree brand LEDs are both more powerful and less expensive than other brands. The Fenix LD01($42 from Amazon) is ridiculously tiny but throws off 80 lumens from a single AAA-powered Cree bulb.

3. Pickpocketing is a major concern of travelers, whether they’re carrying loads of cash or 50 euros that need to last the next two weeks. My solution is to put aside the wallet, often bulky and usually carried in the back pocket, and switch to a money clip, which is slimmer and fits in the harder-for-thieves-to-reach front pocket. It’s not 100 percent foolproof, but I haven’t been robbed in the decade I’ve been using one. I got mine for $10 at a Miami flea market, but if I were getting a new one — and didn’t care about its hideous “Star Trek: The Next Generation” styling — I’d try the Memorex Money Clip Flash Drive ($17.99 at Target stores), which builds in a one-gigabyte USB drive.

4. Whether you’re securing your belongings at a hostel or lashing up your snowboard, a retractable cable lock is a lightweight essential for travel. Make sure to get one with at least a three-foot cable. The Master Lock 4605D costs about $10 at Amazon, but the $18 Kryptonite R4has a detachable LED flashlight (no word on whether it’s a Cree).

5. How do you fit a month’s worth of clothes into a 22-inch carry-on? By sucking the air out with vacuum packing bags. Travel Space Bags look like a good value — $7 for two medium bags, $8 for two large at the Container Store — and my fellow travel writer John Rambow tells me he likes them. (I’ll be testing them out on my next trip.) While you’re at it, it never hurts to bring along a half-dozen Ziploc-style bags, too.

6. It used to be that whenever I went abroad, I never had enough adapter plugs for all my devices: laptop, camera charger, cellphone charger and so on. Then, last summer, one of my readers suggested what I should’ve realized all along: If you bring a power strip, you only need one adapter. Since then, I’ve used the Belkin Mini Surge Protector, which has three outlets and two USB jacks (great for MP3 players and cellphones) and costs $25. (Full disclosure: My wife’s cousin works for Belkin.) 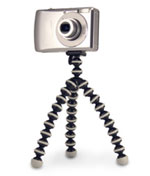 7. Whether you’re a snap-happy amateur or a DSLR-toting pro, stabilizing your camera will make for better pictures. Most mini-tripods, however, need a flat surface to rest upon. Not so the Gorillapod, which has flexible, multijointed legs that let it balance just about anywhere, even around vertical poles, tree branches or wherever you want to prop the camera. The original, good for compact cameras, costs $21.95 from its manufacturer, Joby, while a larger version, which can handle the weight of an S.L.R., is $39.95.

8. I don’t even remember where I got my travel first-aid kit, but over the years it’s provided me with bandages, painkillers and other essential tools for dealing with the bumps, scrapes and hangovers associated with long-term budget travel. It’s almost depleted now, so I’m getting REI’s seven-ounce Adventurer Medical kit ($24.95), which has all the usual bandages and tablets, plus safety pins, duct tape, sting-relief wipes and protective nitrile gloves. I almost can’t wait to get hurt!

9. The most important gadgets, in my opinion, are not those that let us travel more easily but those that let us connect with other people. A deck of cards is always in my bag, and I have friends who won’t leave home without a Frisbee. Those aren’t exactly gadgets, though. Speakers for an iPod are nice to have along — the lightweight, $29.99 iSymphony is what I own — but I sometimes feel like iPods promote egotism: Everyone wants to be the D.J. Instead, I love my $30, 4.7-ounce Grundig Mini 300 shortwave radio. It may not have the greatest receiver or speaker, but I remember one night, sitting in the foothills of the Himalayas with a new friend, tuning in to music and news broadcast from India, England, China, Russia, Vietnam and beyond, marveling at how isolated and yet how connected we felt. Nice.

10. Some gadgets are newfangled and exciting, others time-tested and true — which is why, wherever I go, I carry a notepad and a pen. Moleskine is the ultra-popular choice, but I prefer Ecojot’s 3-by-4-inch recycled-paper notepads (about $5), which are smaller and more flexible, but with enough backing to provide a stable writing surface. As for a pen, I buy Muji’s 0.38-millimeter gel-ink ballpoints, $1.25 apiece.